Known as banded toby, this is a fish (Canthigaster valentini) belonging to the family Tetraodontidae within the order Tetraodontiformes. It inhabits the coral reefs of the Pacific and Indian Oceans, and can be found from the coasts of South Africa to the southern part of the Red Sea, the Gulf of Aden, Seychelles, Mauritius, Chagos, Cocos, Reunion, Maldives, Andaman, Indonesia, Australia, New Guinea, Micronesia, Philippines, Taiwan and the southern part of Japan. To the east it can be found in the islands of Samoa, Tonca, Cook and Tuamotu. To the south in the Pacific from the Great Barrier Reef, New Caledonia and Lord Howe Island. Generally, we will find Canthigaster valentini specimens at most down to 55 meters depth.

The Canthigaster valentini is a small fish, reaching a maximum length of 11 cm. Its back and belly have a rounded shape, and its face narrows as we approach the mouth, which is in a frontal position and has two incisors in each of the jaws, which form a small but very robust beak. Moving on to the head area, we find eyes that are large in size relative to the body and protrude from the head. These have a striking yellow-greenish color. Canthigaster valentini lacks ventral fins. Its dorsal and anal fins are small in size and symmetrical to each other and are positioned towards the rear of the body, both being positioned on the same vertical and consisting of 9 spiny rays. The pectoral fins have between 16 and 17 rays. The caudal fin is wide and has a more or less truncated shape.

As for the coloration of this species, the body has 4 vertical stripes on the back. The second and third stripes become narrower at mid-body and reach the ventral area of the animal. On the contrary, the first and fourth stripes do not go beyond the middle of the body. The fourth extends along the top of the caudal fin. The head of Canthigaster valentini is whitish-brownish at the base with bluish-gray spots that merge together to form bands parallel to each other surrounding the eye area. The rest of the body is white, showing numerous blue-gray spots. The tail and fins are yellow. Characteristic of all species of the order Tetraodontiformes, Canthigaster valentini secretes a mucus containing tetrodotoxin which it uses as a defensive method against suspected predators which, together with its ability to ingest water up to twice the normal volume, will make any predator hesitate to attack it.

The behavior of Canthigaster valentini are diurnal fish and can become very territorial, especially during the breeding season. Juvenile specimens can be found forming small groups with the tropical grouper species Plectropomus laevis and/or the sandfish Paraluteres prionurus. Both species have evolutionarily evolved a similar livery to Canthigaster valentini which gives them an advantage as potential predators believe them to be toxic, although they are actually harmless. This defensive strategy is called batesian mimicry.

Canthigaster valentini feeds mainly on algae, although it is an omnivorous species, which will not hesitate to feed on tunicates, cnidarians, bryozoans, polychaetes, sponges, echinoderms and molluscs.

During the reproductive season, small harems of one male and several females (usually 7) are formed, which will lay eggs usually during the early morning hours, when the female digs a small hole in the sand protected by algae. In this nest the female will lay the eggs that will be fertilized by the male. After 3-5 days the fry will hatch. 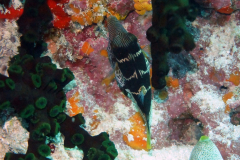 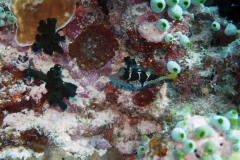 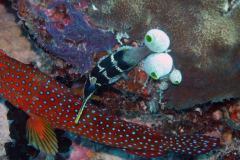 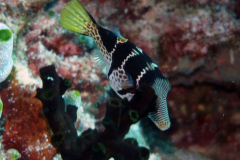 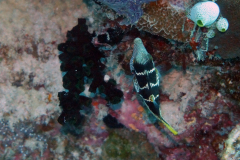 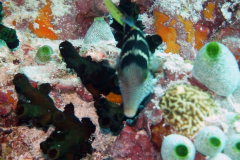 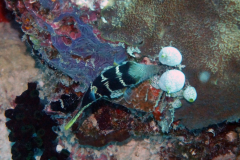