The comber (Serranus cabrilla) is a fish belonging to the Serranidae family and within this, to the genus Serranus. The epithet cabrilla comes from the Latin diminutive 'capra' which means goat and was put in allusion to its way of swimming by jumping or jerking. It inhabits the waters of the Mediterranean Sea, where it is abundant, as well as the northern waters of the Red Sea, the eastern Atlantic Ocean (from the North Sea to the Cape of Good Hope) and the Indian Ocean along the coasts from southern Africa to Mozambique. This species is usually found on sandy/muddy bottoms up to 500 meters deep, and occasionally in Posidonia oceanica meadows.

There are records of Serranus cabrilla specimens up to 40 cm in length, although they usually do not exceed 25 cm. Its body is elongated, somewhat oval, and generally quite pointed with a fusiform shape. It has a large mouth in comparison to its body, which is extensible and has fine but sharp teeth oriented backwards, allowing them to secure their prey. The size of the eyes, as well as the mouth, is relatively large compared to the size of the head of this species. The operculum are equipped with 3 spines and the edge of the preoperculum is serrated. From the opercular region arises the lateral line, which runs parallel to the dorsal margin of the body to the caudal peduncle. As for the structure of its fins, the dorsal fin has 10 spiny rays between which the membranous tissue that connects one spiny ray with the next has notches, and behind the spiny rays we find between 13 and 15 soft rays. The anal fin is formed by a spiny region of 3 rays, followed by 7 to 8 soft rays. The ventral fins have one spiny ray and 5 soft rays. The pectoral fins have 15 to 16 rays and the total length of each pectoral fin is less than the length of the head of Serranus cabrilla. Finally, the caudal fin is emarginate in shape and has 15 branched rays.

Regarding the coloration of Serranus cabrilla, it changes depending on the time of year, age and geography in which we find them. In general, the base color of the body is reddish-brown to yellowish, with between 7 and 9 darker vertical bands that are crossed in the middle of the flank by a wide horizontal light line followed by 2 thinner lines. The ventral part of the body is whitish.

Serranus cabrilla is a solitary species, which can be found in hiding places under rocks, and whose feeding behavior consists of ambushing its prey, among which we find small fish, cephalopods, crustaceans and annelids.

The reproduction of the comber usually occurs during the summer months. When the specimens reach sizes of approximately 17 cm in length, is when they are sexually mature. It is a hermaphrodite species, maturing both male and female gametes at the same time in the same individual. Both are released into the currents, where fertilization and larval formation will occur. 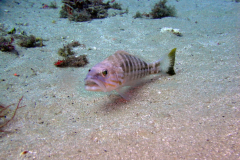 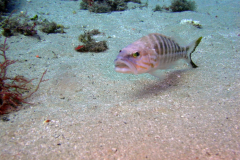 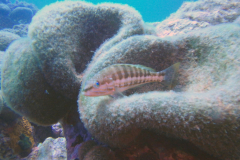