The species Serranus scriba, belongs to the large family Serranidae and within this, to the genus Serranus. The name of the genus derives from the Latin 'serra' in reference to the serrated appearance of its dorsal fin and the specific epithet scriba in reference to the drawings present on the head that recall ancient writings, and hence its colloquial name of painted comber. This species inhabits the waters of the Mediterranean Sea, as well as the Black Sea and the coasts of the eastern Atlantic Ocean (from the Bay of Biscay to Mauritania, including on the way the Azores, Cape Verde and Canary Islands). It is common to find specimens of Serranus scriba on rocky bottoms between 5 and 30 meters deep.

The body of this species has a size of 20-25 cm in length. It has a pattern of 6 dark vertical spots on the flanks of the body, as well as lateral and ventral blue-violet spots. The head is reddish in color and has a pointed shape with the previously mentioned characteristic drawings of Serranus scriba. The mouth is very large compared to the size of the body, and is protractile. The operculum has 3 spines and the posterior margins are serrated.

Serranus scriba is a generally solitary species, which hunts by ambush. It remains motionless on the rocky bottom, to quickly pounce on its prey, among which we find small fish, cephalopods, crustaceans and annelids.

The reproduction of Serranus scriba is hermaphroditic. Sexual maturity is reached approximately during the fourth year of life, or when they reach lengths of approximately 18 cm. The same individual matures both eggs and sperm at the same time. Towards the end of spring or early summer, individuals release both gametes into the currents, fertilization occurs and larvae form and roam freely for several weeks. The life expectancy of Serranus scriba is relatively long, with a typical lifespan of 16 years. 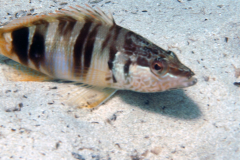