Diplodus prayensis is a species of fish belonging to the sea breams family (Sparidae) that is endemic to the Cape Verde Islands, where it replaces the species Diplodus vulgaris. It lives on rocky bottoms up to 100 meters deep.

The body of Diplodus prayensis is oval and laterally compressed. It can reach a maximum total length of 35 cm, although we will usually observe specimens of about 25 cm in length. The mouth is terminal, slightly extensible and equipped with moderately thick lips. The jaws have 8 long incisor teeth followed by 3-4 rows of small morals arranged in a horseshoe shape. It has a single dorsal fin formed by 12 spines and 13-15 soft rays. The anal fin has 3 spines followed by 12-13 soft rays. The caudal fin has a now forked shape. As for the color of Diplodus prayensis, the base color is greenish-brown being lighter on the ventral side than on the dorsal side. The flanks have alternating longitudinal lines of golden and grayish color. The head region is darker than the rest of the body, and has a lighter oval spot just above the eyes in the nape region. It also highlights the rear edge of the operculum which is black, as well as the presence of black spots in the area of inclusion of the pectoral fins with the body. The pectoral fins are lightly colored, while the rest of the fins are dark, almost black at the edges. Another annular stripe present on the body of Diplodus prayensis is the one we can find on the caudal peduncle. It starts before the end of the dorsal and anal fins, staining the last rays of both fins in black. This annular spot, in juveniles, is not complete but takes the form of a saddle open on the ventral part of the caudal peduncle. Additionally, in juveniles, the caudal peduncle spot begins behind the dorsal fin, without reaching the last rays of the dorsal fin.

The diet of Diplodus prayensis is omnivorous in nature, feeding on invertebrates and small crustaceans, as well as various marine algae. 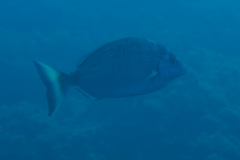