Within the family of sea breams (Sparidae) we find Diplodus vulgaris, a fish that inhabits rocky and sandy bottoms up to depths of 160 meters, although they are really more common at less than 50 meters. It is also possible to find this species in Posidonia oceanica meadows, especially juveniles. It is a very common species on the west coast of Africa, from the Strait of Gibraltar to Senegal. It is present in the Madeira Islands, Canary Islands, but it is not present in the Cape Verde Islands where it is replaced by another species of the same family, Diplodus prayensis. To the north, it is found throughout the Mediterranean Sea and in the Atlantic Ocean as far as the Bay of Biscay.

The body of Diplodus vulgaris is oval-shaped and laterally compressed. It reaches sizes up to 45 cm, although it is common to observe specimens up to 25 cm in total length. The head of this species is slightly pointed, with a small, slightly extensible mouth and moderately thick lips. Its jaws have 8 incisor teeth in both the upper and lower jaws, followed by 3-5 rows of molars in the upper jaw and 2-4 in the lower jaw. The dorsal fin is single and consists of 11-12 spines followed by 13-16 soft rays. The anal fin has 3 spines and 12-15 soft rays; and the caudal fin is forked.

The body color of Diplodus vulgaris is gray-brownish-greenish at the base, being lighter on the ventral side than on the dorsal side. They have a very dark band located on the nape of the neck, just before the beginning of the dorsal fin. This band runs to the base of the pectoral fins and the posterior margin of the operculum, forming a kind of triangle. There are also 15-16 fine longitudinal lines of golden color on the flanks, as well as a black annular band on the caudal peduncle. This annular band extends to the posterior rays of the dorsal and anal fins in adult specimens. The pectoral fin rays are black, and the caudal fin is dark, turning almost black at the distal edges.

Diplodus vulgaris tolerates certain changes in the salinity of the water, which allows them to enter the brackish waters of estuaries.

Their diet is varied, with crustaceans, annelids and molluscs among their prey. Juveniles complement this diet with algae. 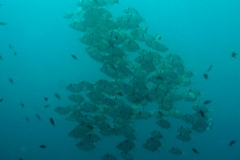 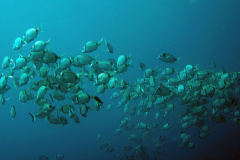 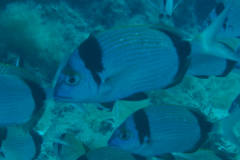 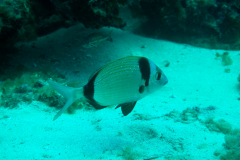 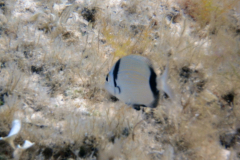 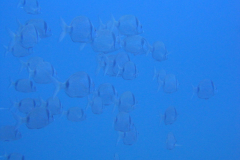 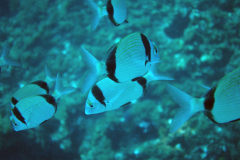