The bream or Diplodus sargus is a species of fish belonging to the family of sea breams (Sparidae). It is a very common species in the Mediterranean Sea, and also present on the Atlantic Ocean coasts of Spain, Portugal and Morocco. It lives in coastal waters, in places where the waves break against the shore, and at depths between the surface and 50 meters. Although it mainly lives in rocky areas, it is also possible to observe this species in Posidonia oceanica meadows.

Diplodus sargus is a fish with a silvery, oval-shaped body and a maximum length of about 25-30 cm. Its mouth is equipped with thick and wide lips, while the jaws have 8 incisor teeth followed on the sides and behind them by well-developed molars. In the head region, there is a black spot, but there is no clear spot on the nape of the neck. The flanks have about 8-9 relatively thin dark vertical bands, some of which are not very apparent. They also have a black spot located on the caudal peduncle, but this is not annular, but takes the form of a saddle, being open on the ventral part of the peduncle. The fins of Diplodus sargus usually have a darker tone than the rest of the body.

As for the behavior of the species, and despite being a gregarious animal, it is much more common to observe large schools of Diplodus sargus of juveniles, while adult individuals tend to be somewhat more solitary.

To feed, Diplodus sargus takes advantage of the waves against the coast, to capture small invertebrates that due to the force of the waves have been detach from the adjacent bottoms. Among its prey we find bivalves, barnacles, sea urchins, starfish, seaweed,...

Regarding reproduction, Diplodus sargus is a protandric hermaphrodite species, which means that all specimens begin their lives with developed male reproductive organs, and later in the course of their lives, they atrophy and develop the female ones. The time when the species reproduces is between the months of February and May. 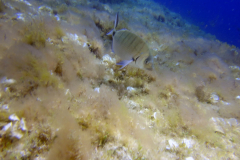 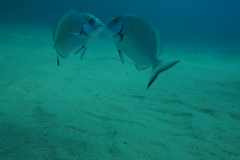 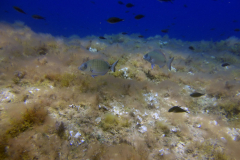 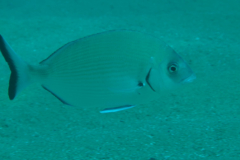 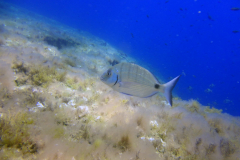