Diplodus cervinus is a species belonging to the sea breams family (Sparidae) that inhabits rocky bottom waters at depths between 30 and 80 meters, although it can occasionally occur at depths of up to 300 meters. In the Atlantic Ocean, it inhabits from the coasts of Spain to Senegal, and further south, from Angola to South Africa. It is present both in the Canary Islands and Madeira, although it is absent in the Cape Verde Islands. We can also find this species in the Mediterranean Sea.

The body of Diplodus cervinus is oval, moderately tall and laterally compressed, generally reaching 35 cm in length. It has a moderately pointed snout, with a slightly extensible, thick-lipped terminal mouth. Its jaws are equipped with 10 incisor teeth in the upper jaw and 8 in the lower jaw, followed in both cases by 1 to 3 rows of small molar teeth. The dorsal fin of Diplodus cervinus has 11-12 spines that increase in length up to the fourth spine. The spiny region of the dorsal fin is followed by 11-14 soft rays. The anal fin has 3 spines and 10-12 soft rays. The caudal fin has a forked shape.

The background color of the body of Diplodus cervinus is silver with golden reflections. It has 5 thick, dark vertical stripes on the flanks, a very distinctive feature with respect to other species of the same family that occur in the same waters. Of the five stripes, the first occurs before the beginning of the dorsal fin, and the last occurs on the caudal peduncle. It also has a dark band in the interorbital space that extends to the eyes and cheeks, as well as a black spot on the upper part of the pectoral fin. The tip of the snout is dark brown. The vertical fins, that is to say the dorsal and anal fins are grayish, being darker in the more distal parts. The pelvic fins are dark. During the reproductive season, the specimens have a yellowish subocular spot.

It is common to observe specimens of Diplodus cervinus forming small groups of no more than 4-5 individuals. In the diet of this species we find among its prey small invertebrates and algae.

In the Mediterranean there are other species of the genus Diplodus that could be confused. Their distinctive features are: 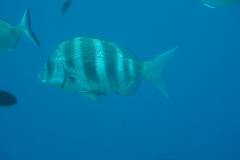 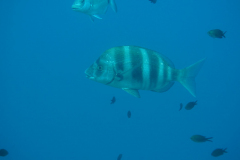 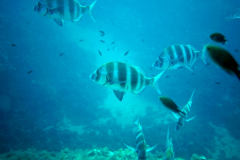 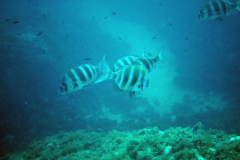 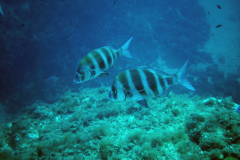 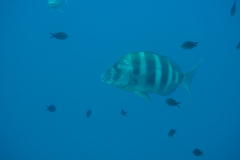 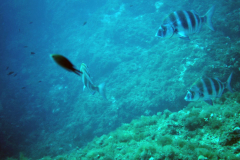 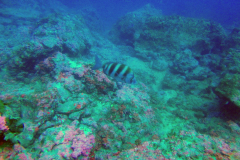 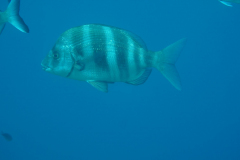