Lutjanus kasmira is a fish of the snappers family (Lutjanidae) that inhabits coral reefs, both in their shallow lagoons as well as in outer reefs at depths of up to 60 meters. In certain locations, such as the Marquesas Islands and in the Red Sea, there are records of sightings of this species at 250 meters depth, although these are considered to be very sporadic. The species is widely distributed throughout the waters of the Indian and Pacific Oceans, from the Marquesas Islands, Line Islands, East Africa, and from Australia to southern Japan.

Lutjanus kasmira has a yellowish color in the upper part of the body formed by the horizontal of the upper starting of the pectoral fin and the lower part of the caudal peduncle. Below this horizontal the color is whitish. On the flanks it has 4 whitish-bluish colored lines. The first and second line, starting counting from the upper one, are born next to the posterior height of the eye. The third line arises from the upper part of the aperture of the operculum. The birth of the fourth line is very subtle, being its origin in the upper jaw. All four lines run horizontally backwards, to the upper margin of the dorsum in the case of the first three, and the fourth to the caudal peduncle, but without entering it. The dorsal, anal and caudal fins are completely yellowish, and the pectoral fins are whitish. The feature that distinguishes Lutjanus kasmira from one of its closest relatives of the same family and very similar coloration pattern, Lutjanus bengalensis, is to be found on the back of the specimen. Lutjanus kasmira has several faint grayish stripes on the lower part of the body, while in the case of Lutjanus bengalensis the belly is completely whitish, without any stripes.

It is very common that specimens of Lutjanus kasmira form large schools of individuals, usually during the day, when they are located near coral reef overhangs or in caves.

Reproduction of the species occurs throughout most of the year, with peaks of reproductive activity between November and December. Clutch eggs are small in size (~0.8 mm in diameter) and hatch within 18 hours of having been laid and fertilized. 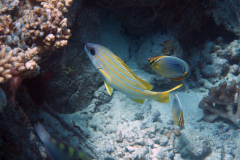 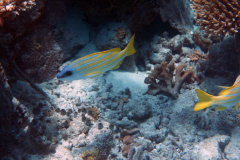 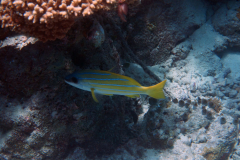