Naso elegans is one of the 20 members belonging to the genus Naso, which together with 5 additional genera make up the family of surgeonfishes (Acanthuridae) in which a total of 73 species are currently described. The elegant unicornfish is an inhabitant of the tropical waters of the Indian Ocean, from the eastern coasts of Africa, including the Red Sea, to south of Durban, and Indonesia. This species has a preference for coastal reefs and not very exposed to currents. It is rarely observed at depths greater than 30 meters.

The body of Naso elegans is characteristic of a surgeonfish, that is to say an oval-shaped body, very compressed laterally, and despite being called elegant unicornfish, it does not have any horn-shaped appendages. They can reach up to 45 cm maximum total length, although their usual size is 35 cm. If we focus on the fins, we find that the dorsal fin is unique and consists of 6 spines followed by 26-30 soft rays, while the anal fin has 2 spines and 27-30 soft rays. The caudal fin is lunate in shape and in the case of adult males, they develop elongated filaments at both tips.

Naso elegans has a grayish-brown body, with a yellow line running from the back of its mouth to the eye; the snout and the front of this line is black. The forehead is light yellow and the lips are orange. Its dorsal fin is yellow and has a blue horizontal line at the base, with a black one above it. The anal fin is dark brown and is bordered in light blue. On the caudal peduncle, it has two orange spots on bony plates on each side, each containing a defensive spine. Its caudal fin is whitish, with a thin black line along its lateral margins and another submarginal one, also black, on the outer edge. Like all Naso, it has the ability to change its coloration rapidly, depending on its mood or the environment.

Usually specimens of Naso elegans live in small groups, although sometimes they can form large congregations of specimens. The diet of this species is based on algae found on the seabed.

Regarding the reproduction of Naso elegans, it should be noted that the thin filaments of the caudal fins are the most obvious sign of sexual dimorphism, and therefore the identification of males and females is relatively simple. Fertilization in this species is external, leaving the fertilized eggs to be spread by currents. 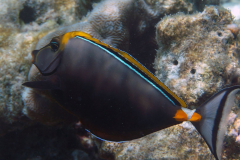 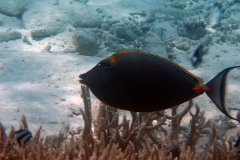 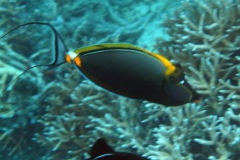 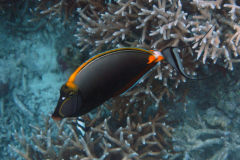 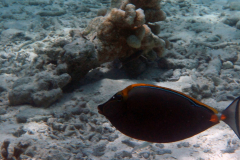